And maybe talk a little shit?

Most of the world can agree that David Bowie’s unforeseen passing was a real fucking bummer. An illustrious icon, who had made such a vast impression on such a large number of people, was suddenly gone…and everyone felt pretty shitty about it.

Where were you when you heard the news? I, for one, was rather inebriated, and let me tell ya, I went from jolly drunk to complete wreck QUICK. I must have cycled through all stages of the grief process within minutes— I railroaded right through denial and flipped my coffee table in a fit of rage; then sat in a carpeted corner of the room and sulked, while poorly slurring along the words to Starman like the quintessential old dude at the karaoke bar who is clearly in the midst of some sort of serious crisis.

Though it was rather touching to see communities around the world come together in mourning, there was certainly no shortage of half-assed tributes from entities hoping to cash out on the exploitation of a society’s open wound.

Instagram models using Aladdin Sane face-paint for likes — The giant murals with branded hashtags going up in front of restaurants for people to pose with —The innumerable amount of mind-numbing Buzzfeed-esq clickbait that flooded the internet in the days that followed — the list goes on.

Now, shortly after the two-year anniversary of Bowie’s death, a shiny new piece of unsightly ass has been erected and unveiled in his honor. A street-level statue depicting Bowie’s various stage personas now sits enameled in bronze on a dingy sidewalk in Aylesbury, England. The newly installed memorial comes as the result of a huge crowdfunding campaign, which raised nearly £115,000 to be used solely for the creation of this haunting hunk of metal. Check this out:

THE FUCK IS THAT, BRO? It’s truly a thing of nightmares. Those stand-alone faces seemingly pushing themselves out of the wall in anguish and torment?! It’s like some fucked up old-testament depiction of a hellscape.

Did you really have to use all of his alter-egos for a single statue? Just pick one, maybe! Stick with the Ziggy Stardust in the middle, but at least work on the dimensions a bit. He looks 4 feet tall and violently malnourished.  DEFINITELY leave out the polycephalic wall of terror though, for sure…I mean, obviously, right? Good god, man. 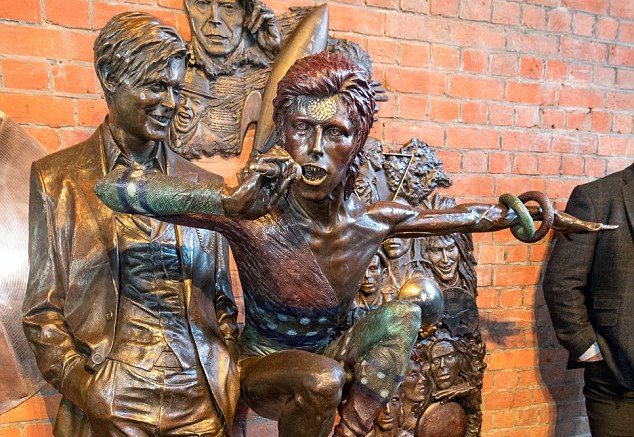 But, above all else, the tackiest part of this whole mess is the fact that the thing is actually equipped with speakers, which rifle through Bowie’s massive catalog of tracks all day long. Hey, we’re not at fucking Disneyworld, ok? The thing doesn’t have to be interactive, it can just be a statue like all other statues. If you’re going to add music, at least make the spiders from mars crawl down the wall on some dope, animatronic shit.

To put a bright red cherry on top, reports surfaced Tuesday that the newly installed sculpture had already been vandalized a mere 48 hours after its public unveiling. The only problem being that the loser who defaced the thing tagged, “Feed the homeless first!” and didn’t instead write, “MAKE A BETTER ONE”. It would make more logical sense, seeing as the culprit here is implying that the government had used tax dollars to construct the monument, when, in reality, it was entirely funded by crowdsourced donations.

So, yeah, he managed to disgrace a disgrace of a statue with an inherently moronic political statement. A real, natural Banksy, eh? 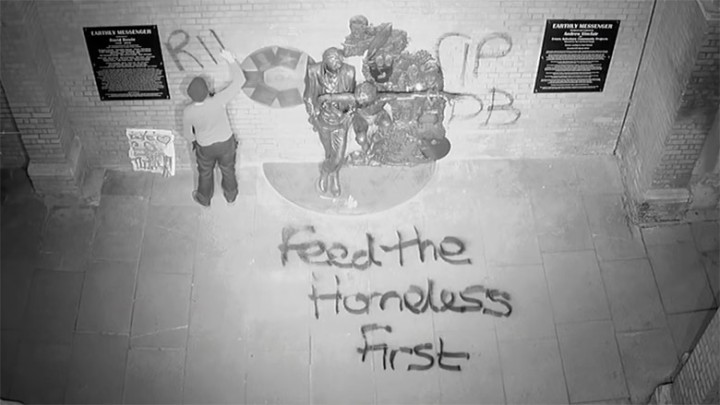 It’s not that I denounce the idea of immortalizing important historical figures through artisan sculptures. It’s just that they didn’t do a very good job. It’s ugly, it’s tacky, and it lacks creative direction— the predominant quality to which David Bowie was most celebrated for. One can even infer that Bowie, himself, would’ve scoffed at the idea of a public effigy, considering his infamous dismissal of honorary awards altogether. I guess my point is, if you’re going to do it, do it with some integrity and build something that truly evokes a sense of wonder, as Bowie’s work did in all of us.

…Or at least just make it look good, for Christ’s sake.